In august 1947 the Ir. P.F.S. Otten Cup was played for the first time. Ir. P.F.S. Otten, the president-director of Philips NV, was the driving force behind this tournament and he also provided the tournament with the challenge cup. Besides this Ir. Otten was a big supporter of youth football, therefore making it understandable that the tournament was named after him.

From the first edition the participants came from the entire country, being both professional and amateur teams. The Belgian club Berchem Sport was the first club from outside the country to participate in 1953. One year later VV Blauw Wit from Amsterdam won the cup outright, after beating hosts PSV in the final and thus winning the tournament for the third time. Afterwards it was decided that a team that won the tournament three years running or five times in total, would be the permanent owner of the trophy.

Hosts PSV won their first tournament in 1955. In the final national rivals AFC Ajax, after extra time, were beaten 3-0. Since 1957 the Otten Cup has continuously been an international tournament. In 1963 English side Sunderland AFC won the second Otten Cup by winning the tournament three times in a row.

For the first time the tournament was played over three days in 1966. It would not be until 1992, before the tournament again was played over three days and that became common practise. A year later hosts PSV permanently won the third Otten Cup by three tournament victories in a row. They again managed to achieve this feat in 1978 as PSV would also win the fourth Otten Cup. It would take 25 years before the fifth Otten Cup would become permanent possession of a club. The hosts were the club to achieve this by beating national rivals AFC Ajax in the biggest ever final win 6-0.

In 1995 the first club from South America participated with Brazilian side EC Vitoria. The Brazilians proved to be a sensation and crowd favourite. During their eleven participations, seven finals were reached of which the club won six, including the sixth Otten Cup in 2006. The tournament of 2007 saw the first female officials taking part in the tournament with miss V. Peeters and miss L. Sabadar. In 2009 again two female officials would be taking part with again miss V. Peeters and miss J. Bakker. 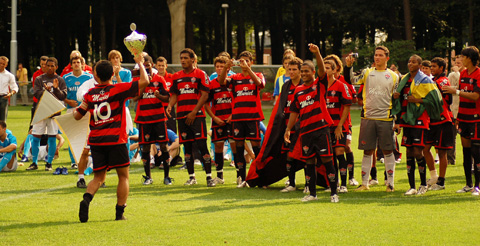 The "Centennial Edition" in 2013, because of PSV being 100 years old, got it's dreamfinal between Real Madrid and FC Barcelona. This baby El Clasico was won by Real Madrid with 1-0. This year two one debutant will compete for the honours with Estudiantes de la Plata from Argentina. Hosts PSV will be hoping to reclaim the trophy from RSC Anderlecht, who won last years final in a penalty shoot out against Manchester United.

The tournament did not take place in 2018 due to a major renovation of the youth accommodation on PSV Campus De Herdgang. 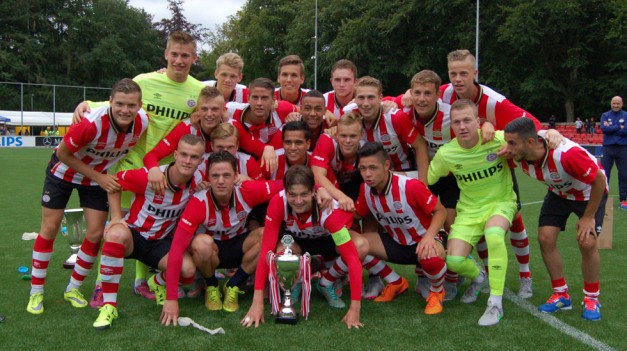 PSV won the tournament in 2015

The Otten Cup is not only a good learning school for talented players, but also for talented referees. Among the Dutch referees with an international carreer are Serdar Gözübüyük, Leo Horn, Björn Kuipers, Danny Makkelie, Bas Nijhuis, Ignace van Swieten and Pieter Vink, who successfully officiated matches in the tournament.

“For the sport applies the same as for everything we do in our lives: it can only give us satisfaction and good results if we put our hearts and minds to it, with giving it our best and in good comradery with and for eachother. It is never about the individual star, but about the team as a whole. Cheerio boys, together with your teammates give all you have for your club. Good Luck!”